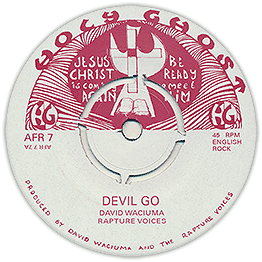 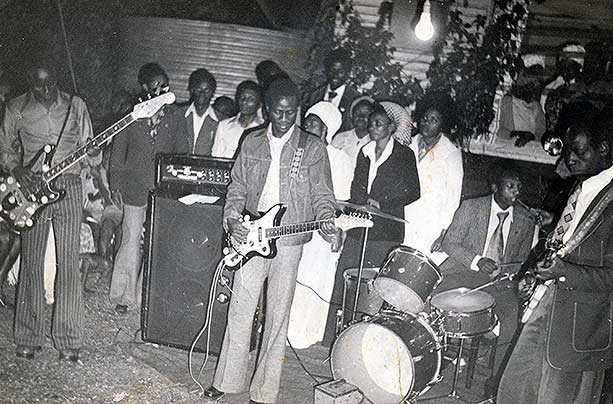 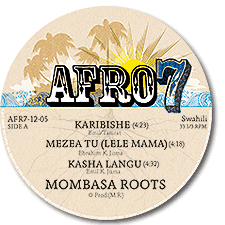 When thinking of urban coastal Kenyan musicians whose careers run decades deep, taarab performers may be the first who come to mind. Indeed, taarab taps into a poetic tradition that goes back centuries and it may be the longest surviving thread in popular music across the Swahili coast. Sadly, in recent years the thriving scenes of Mombasa and other coastal towns have become increasingly quiet, for a number of reasons including economic decline, the ageing of the live musicians who came up in the 1960s and ‘70s, Congolese and later Nigerian music becoming popular, and the recent clampdown on terrorism which adversely affected public life in Mombasa.

There’s another Kenyan coastal sound, one that came up in the seventies and survived it all, a genre that even enjoyed commercial success abroad but has often remained ignored and despised by western critics. Afro7 previously released an EP re-introducing one of the finest examples of this school: Them Mushrooms, a band that played its part in the introduction of coastal dances like cha-cha to the masses; then the second volume of Kenya Special included Hinde, a song from the mid-eighties by African Vibration which even made Kikuyu people in Nairobi speak a bit of the coastal Giriama language at the time, as it became an anthem of sorts. Taarab music has been the essential wedding music of the Swahili coast, but these new bands made their living recording for the club and radio, and performing in hotels. Even though the different currents in Mombasa taarab all borrowed from a multitude of local and foreign genres, Them Mushrooms, Safari Sound Band and the likes created a type of pop music with a modern sound led by keyboards and drum machines that was soon embraced by the eclectic Kenyan audience and foreign visitors alike. 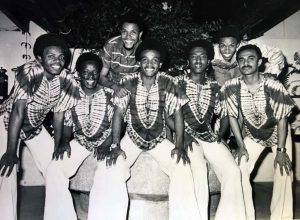 One of the most prolific bands in this field has been Mombasa Roots. They recently hit their 40th anniversary, not a small feat in the Kenyan musical landscape that is full of pitfalls. When they started out in 1977, the group was made up of the brothers Ebrahim, Suleiman and Ethiopian drummer Tamrat Kebede, among others; another Juma brother, the late Ahmed Juma, joined the next year as he left the Mombasa Vikings. In 1979 the band, trying their best to come up with their own compositions, recorded their first single in their residence at Muthaiga (Nairobi) with the assistance of Nabil Sansool, the Syrian born producer who, later on, would assist in elevating the production values of Kenyan coastal music. On What Is It That You Want / My Everything, which was released on the Mombasa Roots imprint, the band was still carving out their own niche, and it wasn’t a big hit. Unlike other bands, they invested in their own instruments and the equipment from the start, which helped them finetune the sound that propelled them to fame by the mid-eighties.

It was a string of singles, released in 1984 and 1985, and ultimately compiled on their first lp ‘MSA-Mombasa’ (1987), that landed the work of Mombasa Roots in discos, bars and jukeboxs in the remotest corners of the country. ‘Disco cha-ka-cha’ was a sensation when it came out, a bold attempt at reinterpreting a semi-traditional female wedding dance for the clubs, but it worked well. Up to that point, the most common way for urban Kenyans and foreign visitors to hear traditional Kenyan music had been through performances during ceremonies or aimed at tourists. Their version of ’Kata’, a sparse and hypnotic rhythm with the right touch of keyboard, is still well remembered after three decades. The chakacha dance songs helped them gain popularity among the taarab audience, but It was their version of ‘Kasha langu’, a Swahili evergreen first recorded in the 1950’s, that got them a lot of new fans; it’s still a part of Mombasa Roots’ live set today. 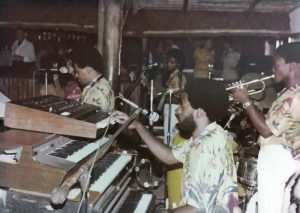 From its inception, Mombasa Roots played the live circuit on the coast and upcountry in clubs aiming at local audiences and foreign tourists, too. In the years to come they accepted gigs abroad, which led them to places like Germany, Dubai and Ethiopia, where they have been regular guests for the past twenty years. And despite most of the founding members leaving the group (Tamrat and Emile since passed away), Mombasa Roots is still going strong today. The band performs in different venues seven days a week with a diverse line-up of young musicians led by veteran Ebrahim Juma, playing own compositions and covers. The latest Afro7 release is a tribute to these pioneers of Kenyan pop music. The EP combines the first Mombasa Roots Band single from 1979 with three of their biggest hits from the mid-eighties: the melancholic ‘Kasha Langu’, the poppy disco of ‘Karibishe’ and the chakacha trance groove of ‘Mezea tu (Lele mama)’.
Head over to our shop to secure your copy, in shops on the 13th of April, but we’ll start shipping out preorders as fast as we have them. 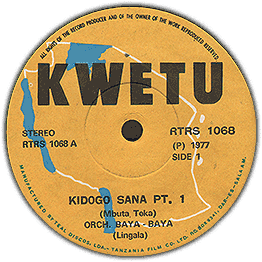 In times of “Feelabration” here at Afro7, we’ve tried to trace the Afrobeat sound in the East and Central Africa. Are there any musicians from Kenya, Tanzania or Congo that can match the prowess and sound of Nigerias Fela Kuti and his counterparts? The closest we come to trace this sound is Johnny Bokelo’s ‘Nakupenda Sana’ that we posted a few years ago. A Congolese artists in the ranks of Verckys and Franco. Mbuta Teka’s Orchestra Baya Baya (an offshoot of Veves) released this track on the Tanzanian state run label Kwetu. A rumbling backbone, funky guitar lick, jazzy horns and a soaring organ line. A different kind of opening jam! Sadly for us Soukous fans it doesn’t really take off in part 2 but still some amusing solos and and quirky lyrics. “Kidogo Sana” means “a pinch..” or “very little.. ” in English. “Alright man! That is new sounds from Africa!!” Enjoy… 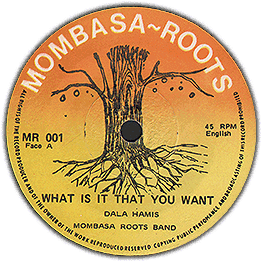 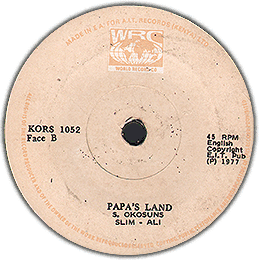 With a good dose of Reggae and Eddy Grant’s magic touch, Nigerian born Sonny Okusun had a big international hit in 79 with the political fueled ‘Fire in the Soweto’.  2 years earlier he had released ‘Papas land’ a key Africa record that had impact spanning from west to east. Kenyans own pop star Slim Ali’s version features great horns, wah-wah, moog, and sassy vocals .. this is the version I personally come back to. Released on the mystical World Records label, responsible for catering the Kenyan music market with domestic  artists but also acts ranging from pre-War Señor Soul to Kylie Minogue.

One of many Lulu’s band singles. A prolific Kikuyu group that recorded for several labels, the groups private D.K. Undugu Sounds was run by the groups leader Daniel Kamau. Expect excellent loud pressing and tight production,  simple funky aural esthetics’s as tight drumming, catchy vocals and a thousand dollar guitar riff! Perfect for the dancefloors of 2012.

Another Kenyan Congolese import band. And another AIT subsidiary label. There is no information to scout on the NET whatsoever on the band,  although they released three other singles on the same label.  Build up around a lovely hummin’ chorus,  great atmosphere  and a kickass tropical guitar harmonic ostinato,  listen when it goes jazzy and the horns kick in midway .. what a tune! Both part 1 and 2 from the single assembled in the audio.

Johnny Bokelo, the counterpart of Congos renowned Franco Luambo had a belt of labels and groups during the seventies and eighties. Like many other Congolese musicians he went to Kenya to finance and release his music. In this case, the song “Nakupenda Sana” is sung in Swahili, meaning again “I love you ..” A tight guitar lick, thematic horns with a neat breakdown. Somewhat reminiscent of a Manu Dibango tune. If you heard it before it was booted with a bogus name on a French 70’ties lp called Kouloukoko du Zairie.