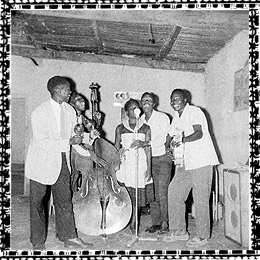 The birth of popular music in Kenya is traced to late 1940s up until early 1950s. This was preceded by international secular songs elements being adopted in the local scene in the wake of World War II. Then yet to acquire official city status, Nairobi was nonetheless vibrant – a melting pot of sorts stirring up music sessions held in handful emergent dance clubs. During this time, assorted instrumentalists and musicians were making a beeline for the Kenyan colonial capital ‘outpost’. They were drawn majorly from Tanganyika [now Tanzania], Uganda, Congo, Zambia and Rhodesia [now Zimbabwe]. 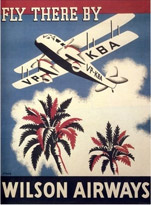 The pre-State of Emergency years, significantly lay the blocks upon whose foundation the immediate pre-independence music scene gradually took shape. Independent research points at numerous key uncelebrated players in the establishment of a formative showbiz scene. Those who seem to stand
out include Otto Larsen, the late Peter Colmore and Charles Warrod.
For some reason this foreigners-trio found themselves, like a moth to light, drawn and sucked into the irresistible allure of Nairobi’s pre-independence musical circles. There are indications Colmore, who came to Kenya in 1938 as an ambitious and adventurous air traffic officer attached to now defunct Wilson Airways – seemed keen to invest locally for the long haul. As a serving sergeant/later captain of the British led East African Forces, Colmore became acquainted with guitarists Fundi Konde and Daniel Katuga [both deceased]. Previously enlisted in the World War II King’s Rifles Forces, the duo was among those identified as music luminaries.

But even as the air-traffic-officer turned talent-scout sought to assemble a skilled clique of returnee ex-soldiers into musical units, a collection of Kenya’s earliest songs had already been recorded on reels and later pressed in the UK on78s-inch shellac records.

This feat was the accrued, cumulative effort of arguably the region’s first ever record label – the East African Records company, reportedly set up by two Britons during mid 1940s. Within four years, an estimated 200 recordings had been pressed with the East African Sound Studios Limited as “executive producers”.

The formative drill entailed capturing presumably culturally-rooted traditional songs on tape-like reels or spools. These were then shipped over a three-day air freight for pressing at the UK’s premier music manufacturer Decca Records established in 1929. It is against this background that Kenya’s music scene evolved, roping in the combined expertise of

Colmore and Larsen – a Danish studio engineer mandated to revive the East African Records label operations after its apparent collapse in 1950. He came on board after a care-taker company took over East African Sound Studio – and plunged into recording then emergent indigenous musical talents.

Most songs from the era were likely masterpieces, no doubt worthwhile enough to attract attention and grab the interest of numerous foreign labels like Columbia 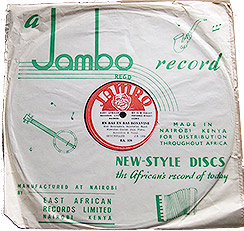 within the span of a decade transformed into Kenya’s nascent ‘showbiz’ scene.

This is the third article in a continuing series about Kenyan music history.
Written by Kenyan music journalist Emmanuel Mwendwa © Afro7.net