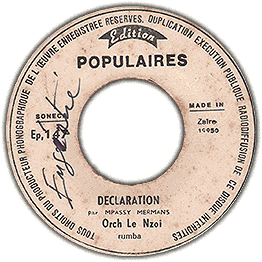 Ohh! Special nightclub pressing, or is Jera Inn a hotel? Probably a mid seventies pressing and it seems the only output on this label is this excellent Cavacha tune by the Great Boma Liwanza. Another Congo import group that recorded and released in Nairobi. The group also had a full LP release and 45 outputs on major labels as Africa, ASL, Pathe & Super Musiki du Zaire. Check out Muzikifan.com for more info on the band. The interplay between the guitar and the horn section is super, and the intricate drum rhythm that sets the pace of the tune. Both sides roughly edited together. Enjoy!

Congo band with both Kenyan and French pressings. You can find some great stories about this and others bands in Gary Stewart’s book “Rumba on the River: A History of the Popular Music of  Two Congos”. Orchestra Bella Bella released this single in 1974 and the lyrics of this particular song deals with prostitution; “I Nganga, what do you want me to do. My work is my livelihood. You find me money, my brothers. I will help you” A slightly rough sounding pressing, but dig the sassy guitar play and horn-section, and the nice handmade label design of Elengi. There is also a mini bio on the group on Tim Clifford’s excellent KentanTanza vinyl site.

It’s late 1980. Imagine yourself sitting in a local bar downtown Harare with a cold Zambezi by your side. The comfort and mood is just right as the red neon light paints a positive atmosphere in the bar. There is a stage there and it’s starting to get crowded! L’Orchestra Les Igao band has come all the way from Kenya and Congo to perform their newest hit. “African Disco Zimbabwe” It’s the end of an era as colonial times are history,  you can feel the joy in crowd and the rush of the band.  Big ups to fellow crate digger Christian Mikkelsen of ONA fame for turning up a copy of this  beauty from the collection. We have no info on the band but you can read more about the City Boom label on Kentanza vinyl. Enjoy!

Another Kenyan Congolese import band. And another AIT subsidiary label. There is no information to scout on the NET whatsoever on the band,  although they released three other singles on the same label.  Build up around a lovely hummin’ chorus,  great atmosphere  and a kickass tropical guitar harmonic ostinato,  listen when it goes jazzy and the horns kick in midway .. what a tune! Both part 1 and 2 from the single assembled in the audio.

Johnny Bokelo, the counterpart of Congos renowned Franco Luambo had a belt of labels and groups during the seventies and eighties. Like many other Congolese musicians he went to Kenya to finance and release his music. In this case, the song “Nakupenda Sana” is sung in Swahili, meaning again “I love you ..” A tight guitar lick, thematic horns with a neat breakdown. Somewhat reminiscent of a Manu Dibango tune. If you heard it before it was booted with a bogus name on a French 70’ties lp called Kouloukoko du Zairie.