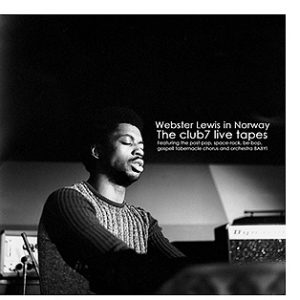 Jazzaggression Records and Plastic strip are proud to present this 2 CD/2 LP release  of the Webster Lewis and the Post-pop, space-rock, be-bop, gospel tabernacle chorus and orchestra BABY!! release Live at Club 7 recorded in Oslo, Norway1971.

This legendary release has become a holy grail for soul and jazz collectors all over the world going for three figure sums on Ebay and includes the dancefloor classics It´s your thing and Do you believe that has been sampled by various hip-hop and electronica bands.

PSP and JA have gotten exclusive access from Arne Bendiksen AS to the complete studiotapes recorded during 2 nights at the legendary Club 7 in Oslo with over 10 hours of music!

We have found the complete photo series taken by Svein Kojan during the Club 7 concert and the release includes in depth linernotes based on an interview done with the producer of the Live at Club 7 record Hallvard Kvåle.

This first disc presents for the first time the whole original double LP Live at Club 7. The second disc contains only unreleased music from the Club 7 sessions with alternative versions of Do you believe, It`s your thing and 5 new compositions including the killer groover Up on the roof. The 2 LP only contains the unreleased material. Since Webster and Hallvard wanted Live at Club 7 as a 4 LP release, but had to settle for 2, we are proud to release these unique recordings of uplifting and spiritual jazz mixed with gospel, Latin and soul. Or better labeled by the band themselves: Post-pop, space-rock, be-bop, gospel tabernacle chorus and orchestra BABY!

All tracks are from the original studiotapes and are remastered for you listening pleasure.