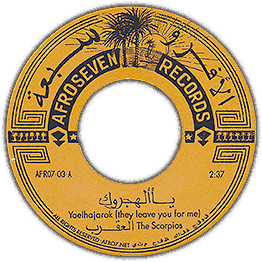 SCREW RECORD STORE DAY! We would have had AFRO7 01 & 02 singles available by this date, but they didn’t make it. On the positive side, we got this one in our store: The Scorpios A west London based Sudanese band playing Traditional tribal songs about family, love and religion from central Sudan. The songs which were played at weddings get together’s, religious ceremonies and events. Many of the musicians moved from Sudan after the Islamist take over and play music coming from a 60’s and 70’s inclination. At that time there was a melting pot in Sudan with many western influences with roots in South American, Funk and Rock&Roll. Sudan was always the country at the Horn of Africa country most willing to mix these influences. The music consists of Arabic rhythms with guitars, heavy bass and synths and sometimes horns supported by heavy percussion and drums. The music consists of songs either sung by women or men depending on the nature of the songs. Much of this music is slowly being forgotten by newer generations from Sudan. This limited single is just a teaser for the full album coming later this year. Hear or download full mp3 tracks in the links below. If you like it head over to the store to grab your copy!