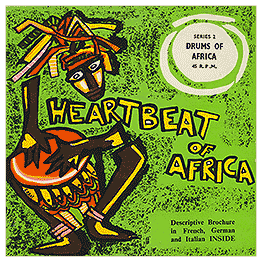 Side One 1. KILUME DANCE, of the fun-loving Akamba people, is sedately energetic and traditionally restricted to elders-of both sexes-of this large Kenya ethnic group. 2. TYPICAL OF BORDER DISTRICTS of Uganda and the eastern Congo is this enchanting beat, played by two leisurely drummers as evening falls. 3. SPIRIT-EXORCISM, a rhythm of Kenya’s Teita people, in a rare, secret ceremony called “upepo” 4. GAY GIRIAMA, of the Kenya coastland, play their drums under the palms when the hot African sun makes work a burden.
Side Two UGANDA DRUMS, in a banana grove outside Kampala, capital city of one of Africa’s most beautiful countries. 2. CHUKA DRUMMERS, from Embu District, Kenya, perform precise and measured dance movements, carrying their tall drums between their legs. 3. ABOARD A DHOW, sailors celebrate a home-coming with happy rhythms. 4. KAMBA DRUMMER-some of Africa’s most accomplished-are urged on by dance leaders eager to call villagers into the moonlight. 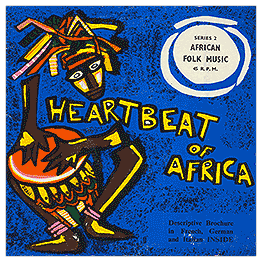 Side one 1. AKAMBA, of south-eastern Kenya, sing the “ng’eta” and stomp out the strond rhythm of a traditional dance. 2. ABALUYIA GROUP, with Africa’s one-stringed fiddle, and a song hummed by a contented villager at nightfall. 3. FROM THE KIKUYU PEOPLE, a song in praise of their leaders is sung by a gaily-attired group of women, in typical style after harvesting. 4. CONCH-SHELL HORN, played in this strange style, can be heard at the Kenya coast as ferry-boats are hauled across the wide creeks. Side Two 1. LUO TROUBADOUR, representative of Kenya’s second larges ethnic group, sings to his “nyatiti” harp accompaniement. 2. MASAI YOUTHS, as they tend thei cattle, extemporize with warrior dreams and ancient battles. 3. KURIA ELDER; with his single-stringed instrument, tells the district new as he strolls along a northern Tanzania country road. 4. TIRIKI MUSICIANS, from western Kenya, sing wryly of their cattle and provide an interesting example of sophisticated African rhythm.
Press to hear SIDE A of the single
Press to hear SIDE B of the single 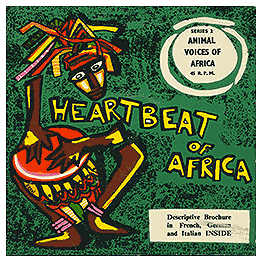 Side one 1. LIONS: Lionshave just brought down a wildebeest and are roaring triumphantly over the kill. As they begin to tear their victim to pieces, they snarl and growl at each other. 2. ZEBRAS: Zebras have got the wind of a lion, and their excited barks can be heard from near and far. 3. WILD DOGS: African wild dogs hunt in packs. When at play or fighting among themselves they utter chitting and twittering sounds. 4. LEOPARD AND BABOONS: The harsh, sawing call of a leopard is answered by a male baboon’s bark of alarm. The spotted cat snarls, and the whole troop of baboons jabbers with excitement.
Side two 1. ELEPHANTS: Human scent has alarmed a herd of elephant. The animals are screaming, trumpeting and grumbling. 2. TREE HYRAXES AND COLOBUS MONKEYS: From the treetops of the forest come the eerie calls of the tree hyraxes and the throaty, throbbing chorus of the colobus monkeys. 3. RHINOS: In dense bush country we come across two mating rhinos and hear their gentle squels and harsh snarls. 4. HYENAS: A lion has made a kill and hyenas bgin to circle around him. We hear their howls as well as the uncanny laughter to which they give vent in high exciement. 5. HIPPOS: Hippos blowing and snorting as they float practically submerged in the water. 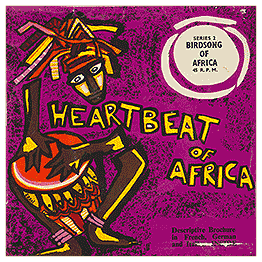 Side one 1. GREATER FLAMINGO (Phoenicopterus ruber): On many saline lakes of East Africa’s Great Rift Valley the Greater Flamingo’s beautiful deep-crimson wings, with their black flightfeathers can be seen. But here is recorded the rare and remarkable sound of a breeding colony, with young. Distribution: Throughout eastern Africa.
2. FISH EAGLE (Cuncuma vocifer): A sound which is very essence of Africa, as blackwingled male and female call and respond in their breeding territories near lakes, rivers and coast. Distribution: From Senegal, southern Sudan and Ethiopia, throughout East, Central and Southern Africa. 3. TROPICAL BOUBOU SHRIKE (Laniarius aethiopicus): A veriety of calls from different races of this bird-beautiful bell-like notes as male and female sing in duet. Distribution: Kenya, Uganda, Tanzania, SUdan, Ethiopia, SOmaliland, Sierra Leone, Nigeria, Cameroun, Congo Kinshasa, Zambia, Malawi. 4. SLATE-COLOURED BOUBOU SHRIKE (Laniarius funebris): In dry thornbush country, slate-black male and female sing attractive duets. Distribution: Tanzania, Kenya, Uganda, Somaliland, Ethiopia, Southern Sudan. 5. DIDRIC CUCKOO (Chrysococcyx cupreus): This small, beautiful cuckoo-its upper parts metallic emeral green and bronze and with a white eye-stripe – often varies its call throgh the seasons. It is parasitic, but takes on its young for feeding after they have left the nest. Distribution: Ethiopia, southern Arabia, Sudan, throughout eastern Africa to southern Africa. 6. RED-CHESTED CUCKOO (Cuculus solitarious): Although this cuckoo is large, it is frequently difficult to observe in tree branches, with its camouflaging chestnut-coloured chest. Sometimes called “the rain bird”. Distribution: Gambia, Sudan, Ethiopia, Kenya, Uganda, Tanzania, through to southern Africa. Side Two 1. SPOTTED MORNING WARBLER (Cichladusa guttata): Despite its common name, this is not a Warbler at all, but related tot the Trush and is one of Africa’s finest songsters and mimics. Whistle at this little bird and it will usually answer. Distribution: southern Ethiopia, southern Sudan, Uganda, Kenya, Tanznia. 2. BLACK-THROATED HONEY GUIDE (Indicator indicator): The male of this interesting species is brownish-grey above, with a distinctive black throat patch, and it havitually tries to lure human or honey badger towards honey bees nests. From tree to tree it flits, chattering and waiting for its followers to catchup. If honey is found, then you must share some with the bird, or trouble will befall you, runs the legend. The song recorded for this disc is its normal treetop melody. Distribution: Senegal, Ethiopia, Uganda, Kenya, Tanzania, Congo through to South Africa. 3. RUPPELLS ROBIN-CHAT (Cossypha semirufa): A fine songster, favouring woodlands and gardens, this handsome bird is also a beguiling imitator of other species. Distribution: Ethiopia, southern Sudan, Kenya and Tanzania. 4. BLACK-HEADED ORIOLE (Oriolus larvatur): Distinctively golden yellow, with head and wings black, its call is also unmistakable. Distribution: Sudan, Ethiopia, southern Somalia, Uganda, Tanzania, Kenya, Malawi, Rhodesia, Mozambique to the Zambesi River. 5. CROWNED PLOVER (Stephanibyx coronatus): This noisy call warns other birds and animals of the stranger’s approach. Distribution: Ethiopia, southern Sudan, Uganda, Kenya, Tanzania, Zambia, Malawi to South Africa. 6. GREEN WOOD-HOOPOE (KAKELAAR) (Phoeniculus Purpureus): A large bird, which tumbles around the trees in small, noisy groups. In sunshine, the male’s iridescent upper parts gleam greenish-black, its throat deep blue and the remainder of the spectacular plumage, purple. Distribution: Uganda, Kenya, Tanzania, Malawi, Congo Kinshasa to the Zambesi River, Sudan, Ethiopia. 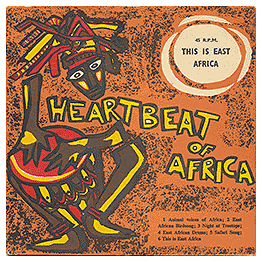 From the heart of untamed Africa, where savage nature still reigns supreme, comes this spell-binding series of records which have captured for you-in brilliant hi-fi the stirring sounds you thrilled to during your safari.
Re-live the fascinating excitment and the majestic grandeur of breathtaking Africa unspoilt by the hand of civilisation.

Heartbeat of Africa will conjur up for you, again and again, vivid pictures of growling lion and trumpeting elephant, snarling leopard and lumbering rhino, the rhythmic jangle of tribal dancers, the vibrant throbbing of African drums, the voluptous melodies of tropical birds, and all those memorable experiences which will carry you back, in rapturous transport, to the enchantment that is Africa.