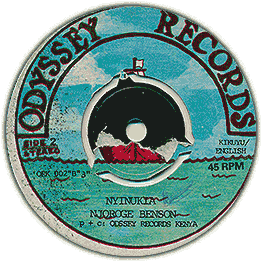 In the exciting evolution of Benga the Kikuyu artists implemented a fast paced rhythm, duo vocal harmony with several layers of guitar comp, melody and a minimalstic steady bumpin base/drum beat with little variation. This receipt seem to have worked as there are several Benga tunes perfected in the same style, often new incarnations of the same melody but with different vocals. Peter Kigia (Wa Ester) had a big hit with the B-side of his own privately financed MPP label. Rickard Masip made us aware that the artist is still ongoing with this youtube clip. Enjoy the original release from 1991! Who said the 90’ties was boring?