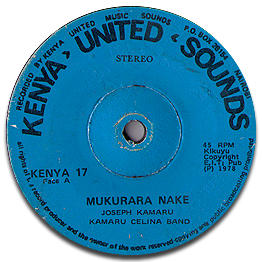 JOSEPH KAMARU – 1965-2013 48 YEARS IN MUSIC – AND STILL GOING ON! Backing up a dozen releases and half a million records sold, this is a name on the Kenyan music scene you cannot avoid. Like his kikuyu counterpart Daniel Kamau, JK also had his own vinyl record label imprint with KENYA UNITED SOUNDS.  The success of his seventies outings ensured him a prolific career mastering all the ups and downs of the Kenyan music scene to this day. He has been performing Gospel music the recent years. Read the Daily Nation post “The memoirs of a musical maverick” and see the K24 feature “Where are they now” on YouTube. The Über funky driven ‘Mukurara Nake’ a is not a political fueled track but merely the classic emotional interaction between a man and a woman. Sung out in the Kikuyu language a man comes home to find his girlfriend in bed with another man,  the disdained man is not angry, this is something he has been suspecting for some time… as the lyrics goes: Since we have known each other a little over 1 year you should know when I am mad.  Look at my eyes and see proof that I am not mad. No matter what you do even if you lock the door with chairs and locks, I will still leave so the two of you can sleep together. I was so prepared, I had dressed up for you, brushed my teeth so I can kiss you but sadly now I will go home and sleep alone staring at the roof. Stop pretending that you don’t know your other lover just because am here. Stop making him look bad in my eyes because no matter what you do am leaving. Thanks to Moses Mungai for the translation.