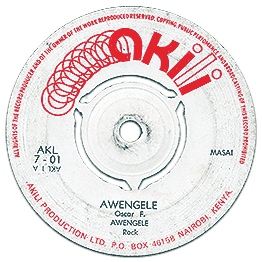 Awengele was a self-styled ‘boy band’ comprising four members, all of Luhya origin (West Kenya). Barely out of school, they were all pursuing careers – as an engineer, civil servant, a cartoonist and marketeer – and played music in their free time, doing regular shows at schools and public events, but never on the club circuit. Inspired by the afro-rock of Osibisa as well as Santana and the Motown hits of the mid-seventies, their style was defined by the musical instruments at their disposal: guitar, bass and a drum kit. Through their manager Joe Kuria they got to record a single for the Akili label, adding an organ to the mix. Kenyan 45s typically mentioned the style of the song on the label, and their self-titled debut listed both ‘rock’ and ‘Maasai’. The latter referred to the vocal style used on the chorus, which was obviously inspired by Maasai chants, and to the song’s lyrics which were in Luhya with a few words of Maasai thrown in; the flipside was in English. Kenya in the 1970s counted a handful of other bands playing rock (never as many as Zambia or Nigeria though). These included Black Savage and Jimmy Mawi, who was an inspiration to the group as they often played together. However, Awengele’s fusion of soul, funk and psych-rock was one of a kind. This and many more great tracks from Kenyas musical golden era 1970s & ’80s are out now on Soundway’s Kenya Special:Volume II, get your copy from the publisher!