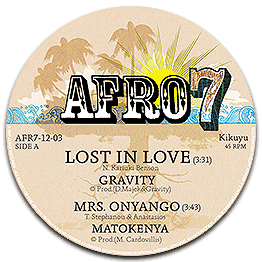 Gravity – Lost in love Towards the end of the 1970s, which had been a decade of abundance in Kenya’s homegrown music industry, CBS (Columbia) set up a well-equipped studio in Nairobi and started releasing records locally. Apart from reissues of European, American and South African hits of the day, they also recorded regional acts. Some of the most interesting output on CBS was produced by Nigerian-born Desmond Majekodunmi, better known as Des Majek, who had moved to Kenya with his wife Sheila who was a gifted singer (together with her husband she would released two singles for CBS Kenya). His early engineering credits in the UK included albums by Fleetwood Mac and Thin Lizzy, and before he started out with CBS in Nairobi he produced a few records for bands in Nigeria. In the early ‘80s Gravity, a group of college students, recorded three singles, two of which for CBS with Des Majek. Group members included Chris Kariuki, better known as Njoroge Benson and Anthony Ndungu, who would later provide lead vocals for the African Heritage Band. While the ballad ‘Goodbye Masai Girl’ catapulted Gravity into the local pop charts, it’s the modern soul / funk on the b-side that makes today’s boogie heads’ hearts skip a beat, and collectors pull out their wallet.

Matokenya – Mrs. Onyango Unknown to them, Kenyan disco group Makonde became an unlikely hype on the dance floors of uptown New York, not long after their first international record was released in France in 1977. ‘Manzara’, a raw disco anthem led by a looping clavinet, a distorted bass and the vocals of Greek-Tanzanian band leader Taso Stephanou, was hand-picked by Afrika Bambaataa and Jazzy Jay for its huge percussive breakdown 2/3 into the song, which made it the perfect record for b-boys to perform their moves to. And so a Kenyan song became a part of the early history of hip hop culture, a fact immortalised on a bootlegged cassette recording of Jazzy Jay deejaying in 1978. While Makonde enjoyed some celebrity in Kenya towards the end of the ‘70s, and group member Sammy Kasule kept using the Makonde name when he moved to Sweden, they were soon forgotten by most until the new millennium when diggers rediscovered the Manzara 12 inch (‘Soseme Makonde’) and the group’s second album ‘Matata Riots’ (EMI, 1978). Only recently, their first album reappeared on the radar – the original issue of their ‘Manzara’ hit. ’Dawn in Africa’ was formally a split title, with four Makonde songs on the a-side and the b-side credited to a group named Matokenya. However, at least some of the credits were shared between both groups, including the Demis Roussos-style vocals by Stephanou, and indeed Matokenya’s sound is very much in line with the early Makonde work. ‘Mrs Onyango’ (likely a tribute to Shaban Onyango’s wife), like ‘Manzara’, is a brilliant merger of distorted disco percussion, fuzzy bass, a trumpet that sounds much like the Makonde horns and a guitar riff that appears borrowed from a rumba song.

Jabali – Folk Song (Kanyoni) The previous Afro7 12-inch release featured Dai, a song by Francis Njoroge. Nowadays seen around Nairobi with his jazz funk outfit, Francis’ early studio credits include Makonde, Radi and Jabali. In the latter project he was joined by Joe Kuria, a versatile artist and music manager who in the ‘70s had coordinated Afro-rock band Awengele (featured on the Kenya Special Volume 2 compilation). The Jabali sound was a precursor of what we hear on ‘Dai’, joyful pop with a disco groove and smooth keyboard licks. The vocal melody and the lyrics were inspired by a famous Kikuyu traditional, Kanyoni Ka Nja (‘little bird’) here sung by Chinese kids. ‘Folk song’ is still remembered by many who grew up listening to Kenyan radio in the ‘80s. Jabali also recorded an LP which remained largely unnoticed and is by now near-impossible to find.