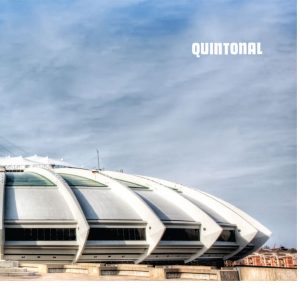 Quintonal, comprised of Pierre Lafrenaye (trumpet), Martin Fournier (saxophone), Daniel Mercure (piano), Pierre Pilon (drums) and Jean Pellerin (bass) were active from 1974 and 1976, during which time they recorded their only commercially available recording, ‘JMC automne 76’ a four-song, seven inch EP. Sold at their concerts, Quintonal’s EP is prized not only for its rarity (roughly 300 copies were pressed) but because of the inclusion of two Quintonal-penned tunes: ‘Antoine’ and ‘Sept-Quatre’, which are extremely rare (and extremely good) recorded examples of Canadian musicians playing in a Jazz Funk mode.

Nearly forty years later, a phone conversation between Jazzaggression and Quintonal alumni Jean Pellerin revealed that while Quintonal never released any further material, they did complete two recording sessions between 1975 and 1976. These recordings reveal Quintonal to be a group overflowing with talent: their arrangements are exciting and sophisticated, performed with great energy and technical prowess. Comparisons with European contemporaries playing in a similar mode, say the French group Cortex or Placebo from Belgium.

Sixteen songs, including ‘Antoine’ and ‘Sept-Quatre’ have been remastered from digital transfers from the original reel to reel tapes by Ebony Cuts and are now set to be released by Jazzaggression on vinyl and cd. The double lp, pressed on 180g vinyl and strictly limited to 500 copies, is packaged in a beautiful gatefold cover. Both the vinyl and digipak CD editions feature unpublished photos of Quintonal and detailed liner notes by Pierre Ringwald, Finnish Basso jazz Radio host. The real deal – made by collectors for collectors!

“A real Canadian jazz jewel with great modal themes & killer-groove funky fusion rhythms, which is very playful in themes and parts, but always on point and not cryptic…the sound of these recordings is much closer to great European jazz funk records & productions from that time, than to the typical american sound, which makes it really an outstanding, nearly undiscovered treasure” – Roskow Kretschmann (Black Pearl, Germany)

“My heart has been grabbed by this evergreen sound. So beautiful, so emotional and yes, so funky. One of the best finds in recent years” – Yusuke Ogawa (Deep Jazz Reality, Japan)

“Deep, funky and Sophisticated, Swinging melodic jazz thats been sealed in a time volt via Montreal (quebec) finally we are all able to enjoy these sounds once again” – A Man Called Warwick (Turning Point, Canada)