Born Ismail Ali, to a family blessed with entertainers. Ismail showed his power in voice through recitation of the Quran and performing the Adhaan (Islamic call to prayer). Brother to the famous ‘D’ Rocky, Kenya’s answer to the wiggles and shaky leg of the King, Elvis Presley, and Mussa, a Limbo & Fire Eating Maestro who excelled as a reputable Drummer in his own right having seasoned with a number of groups both in Kenya and internationally. 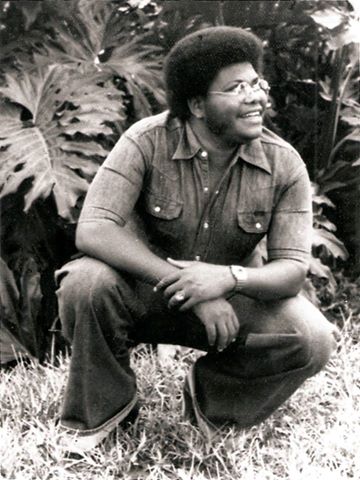 started his performing career as a Cabaret Night Club Entertainer, with Clubs such as Casablanca , Florida , Central & Rocco Bar in Mombasa .

He used his powerful Soulful voice to the extreme, belting out cover versions of Percy Sledge’s ‘When a Man Loves a Woman’ as good as the original if not better. He was also gifted in performing cover versions of ‘The God Father Of Soul’s’ extraordinary collections, likes of Super Bad, Mother Popcorn, I Feel G, Sex Machine etc,

Jingo moved to Nairobi, where all was happening Musically and under the management of a renowned Entertainment Entrepreneur, Jack, he formed the Group, Gloria Africana. At this time Air Fiesta Matata, led by Steele Beauttah was the top group on the local scene. Air Fiesta was based at the famous Starlight Club, opposite the Pan Afric Hotel, that was demolished in later years and is now the Trade Centre Building.

Jingo & his Gloria Africana Band performed at the Embakassi Airport Nairobi, to welcome ‘The God Father of Soul’, Mr James Brown, who was in transit to Zambia for a series of shows. It is said by people who witnessed theshow that his performance of James Brown’s, ‘Talkin Loud & Saying Nothing’ was so well done, that the Godfather of Soul joined Jingo on the on Runaway Stage to do his thing.

Jingo & Gloria Africana were bouncing between Pop-In Restaurant on Kimathi Street, in what is now the Building next to the Nation Centre, and Arcadia Night Club, formerly Bonanza Club, previously also known as the Sal Davis Night Club, today known as The New Florida Night Club, Koinange Street, Nairobi.

Competition was intense, each group trying to outdo the other, and this proved very fruitful as creativity improved. Air Fiesta landed a contract with the “President” label in the UK, moved on abroad, following closely in the footsteps of Paddy’s The Ashantis who were already abroad. There they recorded a number of hits, the best known being, ”I Wanna Do Ma Thing”, with Anwar Rishard in the lead vocals.

Jingo moved on, performing at various clubs in Kenya and across the borders in Zambia , Ethiopia , Tanzania and the Middle East .

He later returned with a bang, just in time for the competitive seventies and recorded the Hit Track, “Fever”.

“Fever” was an instant hit, it dominated the Air Waves, Clubs and if Matatus were what they are today “Fever” would be the number one hit in the Matatu Charts. In the recent years the track “Fever” featured as one of the sound recordings in the Award winning British film, “The Last King of Scotland”, a story about Ugandan Leader General Idi Amin Dada, the movie won the Best Actors Award.

He featured in a BBC Musical Documentary with Taso Stefano & Makonde, Taraab King Juma Bhalo and Radio DJ Abdulhaq with a Big Q.The Film was titled, Afro-Rock, Sweet Sounds of Honey and aired in the UK in 1978.

Jingo had other follow up hits and soon gave up releasing any new songs due to the intense piracy of music that plagued Kenya then and still does to this date.

He reverted back to live performances and eventually settling in Club Management at the prestigious Beach resorts in Mombasa , Kenya .

Ismail “Ali” Jingo was found dead in his Hotel apartment at the South Coast , Mombasa , Kenya , cause of death was presumably Massive Cardiac Arrest.