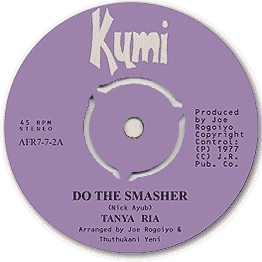 Born in Nyeri in 1953, Rachel Wanjiru, aka Tanya Ria singing came at an early age, as a dedicated Christian in the Kikuyu tribe choir practice is day to day routine. It was in 1977 Kenyan music journalist Nick Ayub and producer Joe Rogoiyo took her to the studio and recorded Do the Smasher and Love You Didn’t Want backed up by the Trippers band(not to be confused with the Tanzanian outfit) led by Francis Njoroge on Keys, Berry on guitar, Charlie Muthemba on bass and Franco on drums. However it was a short-lived singing career, she was professionally a physiotherapist and that took over her time. Sadly Tanya Ria passed in 2013 only 60 years old. It was to her family great surprise they stumbled upon her mother’s recordings on afro7.net by googling her stage name. It was the first time they had heard these songs! Back on wax again as a limited single, with press out centre and silk pressed custom sleeve. Check out the tracks below and buy direct through our order page.