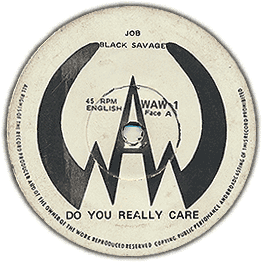 And now for something completely different! The Black Savage group, famous for the rare mid-70s EMI LP. The band line-up featured one prominent member; Job Seda, better known as Ayub Ogada (later released an album on Peter Gabriels Real World label) In a Pink Floyd-esque landscape these two tracks are oddball and unique enough to go unnoticed. Completely without any noticeable local rootings, except the lyrics. There is an uncanny quality over them and both songs complete with anti-hunting lyrics “Save the Savage, don’t shoot ’em down, they are trying to survive, they have feelings too…You know people, I think it’s very strange. How would you feel if someone was wearing your skin, or wrapping it around their feet, have you ever stopped to think, that all these animals all over the world, you know they have feelings too, bet you never thought of that, there you go shooting them down hanging them up on your wall to hide the cracks!”. Thanks to Jumanne Thomas for finding the tunes! 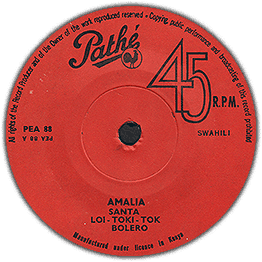 Love songs, irrespective of lyrical inspiration or language used – are endearing and captivating. They always have a way that connects to audiences with consummate ease. The song Amalia is no exception, despite its seemingly economical use of verses, astutely weaved around four simple lines that ooze with passion. Undeniably, the song-writer must have been deeply smitten and enamored by his feelings for Amalia. She is lyrically described as being “..ua langu la maisha ya dunia…” [the flower in his life on earth]. His heart yearns intensely for her charm, and love to shine through the darkness of a lifetime without her presence. The song’s laid-back and mellow refrain did likely serenade countless couples on the dance-floor, drawing lovebirds closer in tight embrace, each enveloped in the idyllic moment. Witty words like bolero [means slow-tempo] engraved on the 45rpm sleeve, were used to categorize specific tracks. Anyone with a keen ear for good music is bound to appreciate song’s adeptly structured guitar-work and rhythmic interplay, crafted during what was a possibly riveting recording session. On the flip side, Lakusema Mimi Sina – loosely translates in English as having nothing to say, steps up the tempo a notch higher but lyrics maintain the quest-for-love theme. Notably, either track bears less or minimal foreign influences – a tactful departure from the commonplace feature for most bands of the era. There is hardly any pronounced James Brown overtones on the trend-setting Loi Toki Tok band’s songs – grounded in an indigenous feel flowing through the instrumental arrangements.

Another goodie from Santa Loi-Toki-Toki Jasta, a lovely tune with mod feeling. Check the superb organ & guitar solos. They recorded several funky pop songs such as ‘Ware Wa’ or ‘Lakusema Mimi Sina‘ on Pathé, and one 45 on Angel, which is a bluesy, melancholic afro-ballad with deep wah-wah guitar licks. Very unique sounds. One of the most distinct bands from Kenya.